Sat 2 May - Sarah Kate Michel - songs and ecology of Sumatra

Sarah Kate Michel, aka Pandorasdiary aka will appear for a Sumatra Special.

Jude Cowan Montague spent some time in Bukittinggi (West Sumatra) learning Saluang music and is planning to return soon to see how things have changed... Sarah Kate Michel loves North Sumatra in particular and learnt some traditional Batak, Javanese and pop there (aka DANGDUT).

Jude CM is going to do some Saluang, and Pandorasdiray (aka Sarah and Maya) will be playing a song or two live and chatting about our current project in Sumatra www.pandorasdiary.com/gamefortwo

A panel including Alice Foster will be discussing the rainforest, sustainable tourism and more.

Posted by Jude Montague at 23:06 No comments:

A discussion with the London-based painter and curator.

Sean Worrall is an artist and a gallerist. Working from East London, he currently runs and curates Cultivate, previously based in Vyner Street which has recently morphed into a pop-up experience. Mostly Sean is a painter and he discusses a current project in which gallery meets street - #365ArtDrops on recycled found things in 2015.

In addition to discussing his own work and the underground art scene in London he will talk about representation of art, and what stories are hot and not in the London media with host Rebecca Feiner.
Posted by Jude Montague at 13:34 No comments:

Improvising artists Ivor Kallin and John Bisset join Jude Cowan Montague for a reimagining of her new album 'The Leidenfrost Effect' with Wim Oudijk released on Folkwit Records and Disco Fair.
Posted by Jude Montague at 13:29 No comments:

The working people of London in the 1840s. Mayhew documented street life in articles for the Morning Chronicle. Costermongers or street traders, prostitutes, mudlarks, sweatshop workers, Punch and Judy men, pure-finders (who gathered faeces to sell to tanners), photographers, labourers, beggars, rat catchers, recyclers, sewer-hunters, flower-sellers, street authors, all manner of enterprise and survival found its way into his oral histories. Mayhew's work references earlier habits than those current in the 1840s. He references the 'saloop' shops, stalls vending drink made from the powder of the red-handed orchids from India which were replaced by the modern coffee stalls. The street diet of 'hot shee'ps foot', 'pepper and saffron' and 'hot peascod' are part of the oral history of the obsolete cries of the costermongers.

Selections form the basis of a live studio improvisation by Jude Cowan Montague. Part of a mini creative series for 'The News Agents' output based on early journalism and documentary. 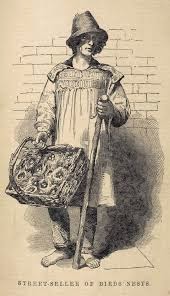 Bird-nest seller
Posted by Jude Montague at 01:29 No comments:

The artist Geraldine Gallavardin on Lab451London, her platform for multi-talented international artists that explore performance as one of their versatile practices, about her own work in installation, visual art and working with the heritage of twentieth-century artists such as Marcel Duchamp.

The work of Agnes Varda, filmmaker, photographer and the only female director of the French New Wave made a 2000 documentary film 'Les glaneurs & la glaneuse' The Gleaners and I. a controversial work as Varda abandoned high-end film equipment for low-end digital video. Potatoes are one of the gleaned products ruminated on in the film. Gallavardin produced a participatory/soundscape performance 'L'origine du monde' (the origine of the world) after Gustave Courbet, Marcel Duchamp 'Etants donnés' & 'Les glaneurs'. This will be visited within a new piece of performance audio art created live by Gallavardin and Montague.

Geraldine Gallavardin on going impromptu as part of her installation “Are you ready for the Fair Marcel Duchamp” – Frames as Ping Pong bats with a collage/photo featuring “Sixteen Miles of String” Marcel Duchamp piece (during the exhibition the First Papers of Surrealism exhibition, New York, 1942)+ foil paper+strings — during exhibition Rhizome’0002 “The Indian Summer” at Camden Image Gallery October 2014 – London

Geraldine Gallavardin is a conceptual contemporary French artist; a curator, poet, musician & actress based in London. Originally from Lyon, France she holds two MA in Fine Art, one from “Les Beaux-Arts de Grenoble”, France (1997) & one from Chelsea College of Fine Art & Design, London (1999). Geraldine has been in the Art Scene since the 90s.
She used participatory/readymade performances art, social sculptures, installations, drawings, videos & live art as her main artistic language. She creates Free Improvised Music/soundscape in her performances & has played abroad & in the UK with band such as “The A Band”. She has exhibited internationally in Art Centres, Galleries, art Festivals & in the UK in places such as the ICA, the South London Gallery during the London Biennale in-situ by the Tate Modern and The Serpentine Gallery.

Lab 451 London is a platform founded by Geraldine Gallavardin for multi-talented international artists that explore performance as one of their versatile practices. On a journey with raconteurs sprinkling an inch of conceptual art, raw happenings, soundscape & experimental impromptus music accompanied by merry troubadours, poets declaiming their thirst, wicked opera singers, theatreoholics; performers of all kind feasting on the possibilities to encapsulate their unframed vision of our era”

The idea of Lab 451London is that of a moveable laboratory for international artists to express & emphasize through their own unique art form; a language, whom as a Freedom embodies the way we see & represent the world around us.

The title refers to the dystopian novel from the American writer Ray Bradbury published in 1953 during the McCarthy era & the French New Wave filmmaker François Truffaut who wrote & directed a film adaptation of that novel in 1966.